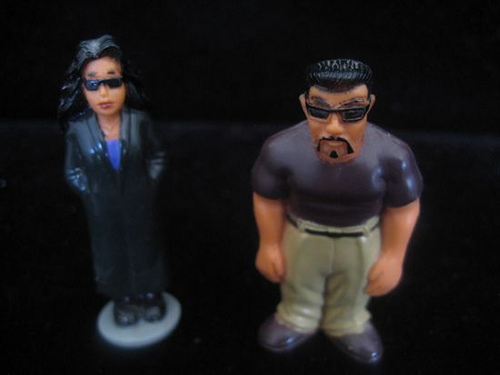 [The auction for this object, with story by Ron Currie Jr., has ended. Original price: donated. Final price: $41.00. Significant Objects will donate the proceeds from this auction to Girls Write Now. This object was part of a collection curated for Significant Objects by Paola Antonelli; the story was co-published on Core77.com.]

They were a silly thing to get so obsessive about, in retrospect. What can I say? I was in my early twenties, so I imagined my fixation on Homies would come off as a moderately hip eccentricity. Like, “He’s cool enough not to take himself too seriously.” Or, “He’s self-possessed enough to not care if anyone thinks that collecting arguably racist figurines is just, well, you know, kind of gay.” Something like that.

And that was exactly how she saw it, at least when we’d first met and were both perfect, before all the craziness that came not too much later. I had this tic — couldn’t leave the grocery store without popping two quarters into the Homies vending machine and turning the dial. Even had a little ritual I performed, like a muted rain dance, to ensure I didn’t get a duplicate. Early on, she found all this hilarious and endearing.

There were all kinds of ways she tried to brand me, but here’s the worst: she took my two favorite Homies, Shady and Wolfe, the first two I’d ever bought, and stuck them to the dashboard of HER car with Gorilla Glue. Without asking. We’d been together all of three months. She showed me what she’d done and she smiled and put an arm around my neck and said, “Don’t they go great with Dashboard Jesus?”

It was the first indication that I was in trouble. There were others to follow. Three years’ worth.

She was honest, though, I’ll give her that. She told me about both times she slept with other guys, for instance. The first one, I let it go. Maybe she was right, maybe I was withdrawn and hadn’t been holding up my end of the bargain. She’d had a rough go of things, too, really rough. They ate out of dumpsters when she was a kid. That stuff figured into my thinking. The second time I wasn’t interested in making excuses for her.

While she packed her shit I went downstairs and put my elbow through her driver’s side window and tried to unstick Shady and Wolfe, with no luck. I knew she’d be a while so I went to my buddy Jazz’s place and asked to borrow his jigsaw.

Jazz told me later, while griping about the two broken saw blades, that all I’d needed to do was pour some kerosene on the glue and it would break down. I tried this, and lo and behold. Shady and Wolfe made their way into storage, and eventually into the garbage, but that piece of dashboard went in a 4×6 picture frame. No, seriously. It’s right over there, take a look. That’s genuine Mazda 323 hide, my friend, and I earned every square centimeter.