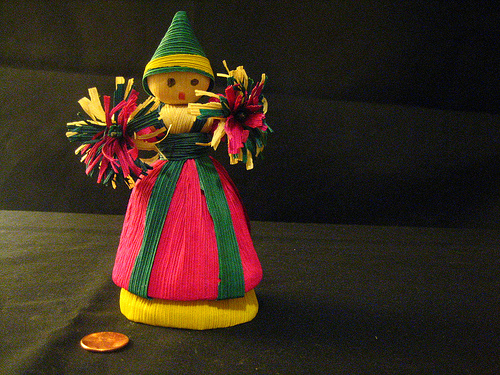 [The auction for this object, with story by Lance Gould, has ended Original price: $1.50. Final price: $14.50. Significant Objects will donate the proceeds of this auction to Girls Write Now. ]

Carpenter usually took a bathroom break at 11:15. Today, the skinny bastard was still going through e-mail at 11:47. He hadn’t gotten out of his chair since he first parked himself in it at 9:03.

“God DAMN it — what the hell is he doing?” Kohler muttered into the phone.

“His insides must be bursting,” Goldberg replied.

Carpenter rose and stretched. He took three somnolent steps toward the restrooms. Kohler and Goldberg exchanged arched eyebrows, and signaled to Velasquez, who had also been eyeing the suspender-wearing pigeon. Then Carpenter’s phone rang. The middle manager ambled back to his desk, answered it, smiled, and settled in for what seemed like it could be a lengthy exchange.

“JESUS,” yelled Velasquez, so loudly that all business in the office briefly came to an abrupt halt. Goldberg rebuked him with a murderous stare, and Velasquez shrunk back behind his laminated steel desk. Kohler picked up the phone and called Goldberg. “Maybe I could be a piano page turner or somethin’.”

“A piano page turner. You know, a dude who all they do is turn the page at a recital or whatever.”

“But you don’t know jack all about classical music.”

Carpenter stood up, stretched again, and this time nearly sprinted to the restroom. Velasquez, too obviously, raced toward Carpenter’s desk. Kohler winced, but he and Goldberg also hurried over to Carpenter’s corner cubicle.

“That’s enough, Alejandro,” scolded Kohler. “What’s your problem, dude?” He shoved Velasquez out of the way. Velasquez stumbled, knocking the pink, green, and yellow cornhusk doll off the desk. It was a gift from the Trinidadian mailroom guy, and had faced out into the office as if standing sentinel against pilfery.

“Watch it!” hissed Goldberg. “You’re making a mockery of the whole operation.”

Velasquez stared at the doll on the floor.

Kohler picked the doll up off the floor, staining it with his candy-soiled fingers. He placed it back next to the gumball machine, facing inward.

Wilson, observing the whole affair from nearby, shook his head. He opened his mouth to say something, but Velasquez shoved a finger in his face.

“Shut it, fat man,” warned Velasquez, scrambling back to his cube.

Kohler and Goldberg took the cue and also shot back to their cubes, sitting down just as Carpenter turned the corner. They had emptied the ¾-full machine. Carpenter reached his desk, went to turn the handle of the gumball machine, and came up empty. He frowned. He looked at his cornhusk doll, now sullied, and quickly glanced around the office. The three perps were studiously on pretend phone-calls.

Carpenter looked at Wilson, tsked, and said, “If you want candy, Peter, all you have to do is ask.”

Lance Gould is the editor of the Boston Phoenix.