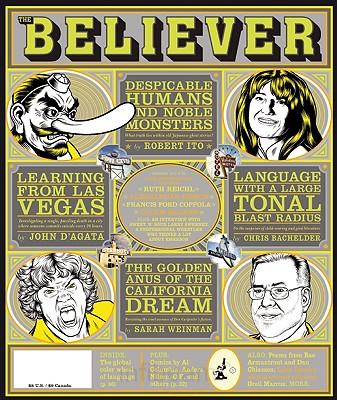 We are delighted to announce our latest collaboration! This week, Significant Objects will publish five stories in collaboration with The Believer, the literary magazine that “puts out a welcome mat for pluralism and wide-eyed curiosity,” as The New York Times Magazine once put it. Believer co-editor Ed Park, who wrote about a Cow Vase for us last summer, helped make this teamup happen, but we’re particularly grateful to Believer managing editor Andrew Leland, who assigned four thrift-store objects to Believer contributors, and a fifth to Heidi Julavits, author of three novels and a founding co-editor of The Believer.

The other Believer contributors are: Trinie Dalton, who has authored, curated, and/or co-edited five books; Justin Taylor, author of the story collection Everything Here is the Best Thing Ever and co-editor of the arts annual Agriculture Reader; Miranda Mellis, author of The Revisionist and Materialisms; and Damion Searls, author of the story collection What We Were Doing and Where We Were Going. You’re going to want to bid on the excellent objects they’ve chosen, and about which they’ve written so well. So stay tuned.

As you will have already noticed, we jumped the gun on Believer Week, and published Searls’ story yesterday. That’s because he was doing a reading last night, and we wanted to give his fans and friends instant access to his Significant Objects story.

The week of April 26, we’ll publish stories by Kathryn Kuitenbrouwer and Peter Rock, plus a related trio of stories by Ben Greenman, Maaza Mengiste, and Wesley Stace. And that’ll be all she wrote for Significant Objects’ third volume of object-oriented short-short stories! Hopefully, we will have raised about $1,500.00 for Girls Write Now, by then. Please help us spread the word.