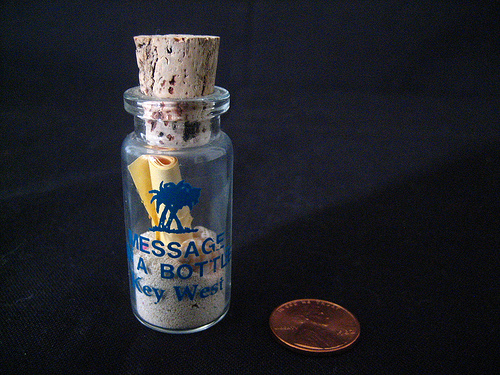 [The auction for this object, with story by Maaza Mengiste, has ended. Original price: 33 cents. Final price: $19.00. This is the second of three stories in our Identical Objects series. Proceeds from this auction go to Girls Write Now.]

There was a set of triplets in Addis Ababa born on the third day of the third week in the third month of the Ethiopian new year. Born so close together they could have been simultaneous births, their neighbors called them A’nd, Hulet and Sost: One, Two and Three. The oldest, A’nd, was the most logical. Hulet, the most charming, and Sost was the dreamer. Everything one did, all three did. One didn’t utter a word without the other two mouthing it in unison. They were so identical, so synchronized in every move, that sometimes A’nd, Hulet and Sost couldn’t decide who had been the originator of an idea, who the deliverer, and who the interpreter.

Young, handsome men, the trio’s proudest possession was a bottle of sand an American tourist had given to them nine years ago in a bar on a side street near Bole Road. Each year on the same day, they sat at the same table, drinking the same beer and imagined the secret message waiting to be written on the blank piece of paper rolled inside the bottle. Each year, one of them suggested a line. Each year, the two voted against the one, and all agreed on the outcome.

But then came one night when the trio’s favorite waitress served them three equally measured glasses of Meta beer, but brushed a singular soft hip against only Sost. She whispered into his ear while tapping the bottle with a long, red nail, speaking so softly the other two couldn’t hear.

“It’s my turn,” Hulet said quickly to cover up the tense few seconds when none of them knew what to do except stare at the waitress’ lush lips slide into a luscious smile as she walked back to the counter.

A’nd, ever logical, had nodded. “She knows it’s Hulet’s turn to think of a sentence.”

Sure enough, when the trio turned their identical heads at the identical time, the waitress was swaying slowly at the counter, her eyes teasing Sost, who blushed and looked instead at the bottle from a place named after a key.

It all would have gone back to normal if Sost, secretly in love with the waitress for the last seven years, hadn’t spoken: “It is the best sentence any of us could ever imagine.”

The other two, one as equally surprised as the other, sat back, unsure of what to do with this disregard for order. Both of them shook their heads but Sost’s stayed still, his gaze frozen on the bottle, until he could bear the separation no more. Then he met their stares.

The silence, long and drawn out, then tripling in duration, was agonizing for each.

A’nd, Hulet and Sost, unaccustomed to separate opinions, afraid of any discord, finished their Meta beers in four large gulps and left, the bottle the bar’s only witness to a pretty woman dancing slowly by herself in the dark.

Maaza Mengiste is the author of Beneath the Lion's Gaze.