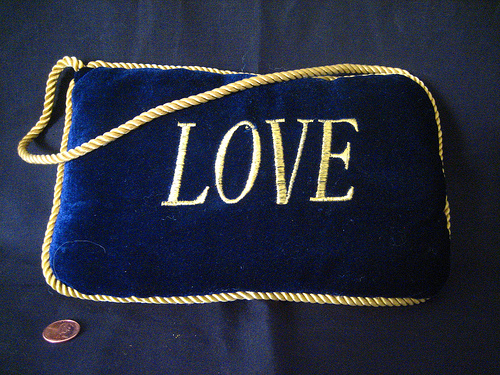 [The auction for this item, with story by David Abrams, has ended. Original price: 99 cents. Final price: $36.00. Significant Objects will donate the proceeds of this auction to 826 National.]

In the end, the pillow came between them.  It was the last bone of contention, the impasse they faced after dividing the spoils of a nine-year marriage.

He said the pillow was his by rights; he’d bought it.

She took the stance that since he’d bought it for her, she could do with it as she chose.

He said he’d known from the first—the unmistakably crushed look in her eyes as he’d pulled it from behind his back—that she’d never really liked it, despite the fact it was her favorite color and plainly said LOVE in shimmering gold threads.  One thing he was always good at was reading her face.

She claimed she had too loved it, considered it one of the few valuable artifacts of their years together.  And, archeologically speaking, that was all that was left of their marriage: artifacts.  She pictured herself crawling on her knees, scraping with a little tool and blowing off the dust with a brush.

He said, if she loved it so much why did she leave it on the bed, untouched, and never said a word when he started using it to prop up his head while reading?  See, see, there’s one of his hairs on it right now.

She said he was missing the whole point: it was a decoration, not an actual pillow.  You were supposed to hang it somewhere, she’d just never gotten around to it.  But now she had plans for it, had already picked out a spot in her new apartment.

She said, Yeah! And then she challenged him to remember where he’d bought the pillow.

That had shut him up for a moment.  He could remember it was Petaluma—or had they been in Susanville then?  Damn! He knew he’d gotten it at one of those stores he’d always hated—home décor boutiques, the kind of places that made him itchy, like when she forced him to traipse after her into the lingerie section saying “Here, hold this” and “What do you think?” as she held the bras against her chest.  Back then, he was still willing to do these things for her.  He’d gone into the boutique, face burning, because he knew royal blue was her favorite color.

She said, I’m waiting.  Can you or can you not remember when you bought me this pillow?

And he shot back, Maybe I can and maybe I can’t, but what’s it to you?

She called him a name, then he called her a name, and on it went.

So, when Judge Solomon Twain of the 25th Circuit Court gave them their options for property settlement, both knew what they would choose.  They kept it to themselves—didn’t even tell their lawyers—but they harbored secret plans for pulling the LOVE pillow apart, seam by seam, thread by thread, until there was nothing left at all. 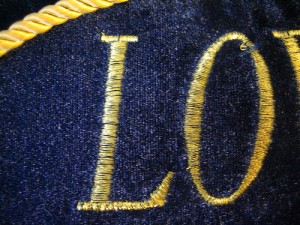 David Abrams' stories, interviews and essays have appeared in Esquire, Glimmer Train Stories, The Missouri Review, Greensboro Review, and other literary periodicals. He's currently at work on a novel based on his experiences during the Iraq War.