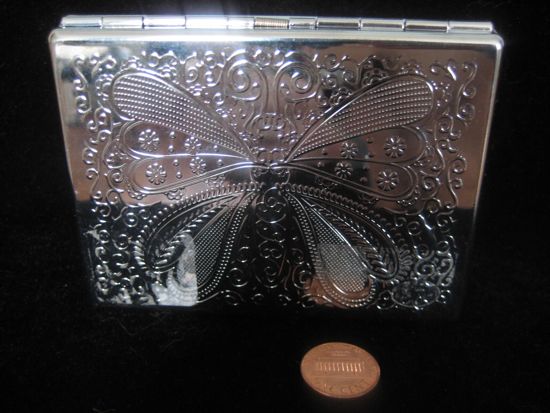 [The auction for this Significant Object, with story by Margot Livesey, has ended. Original price: 10 cents. Final price: $33.77.]

Lydia felt the unfamiliar weight even as she stepped over the threshold of Stacy’s flat, and when, in the hall, she reached her hand into her pocket, the metal rectangle fitted snugly into her palm.  She continued down the stairs, across the park and towards home, the metal warming, pleasurably, to her touch.  Mine, she thought.  It felt like a compact, the kind her mother used to have, when she still had a mother.

In the gloom of Stacy’s hall she must have taken the wrong coat.  With half a dozen similar garments, the chances of seizing the right one were probably no more than thirty percent.  But she could not bear to return to the roomful of guests, braying over the goat cheese tartlets, nor to return the compact.  Her own coat, after all, was nearly a decade old, and threadbare, whereas this one, as she strode across the chilly grass, felt comfortingly warm.  When Lydia reached her flat, she did not stop to remove it before she examined what she held in her hand.

Not a compact but a cigarette case — a silver cigarette case. Even when she  smoked regularly, she had never owned such a thing.  Now, as she studied the graceful butterfly on the lid, the wings unspooling in sleek curves and arabesques, she felt a familiar craving.  Just one, she thought.

Inside, however, were no cigarettes.  Instead the clip held a piece of white paper.

I want to count your fillings and lick your vvertebrae.

Lydia’s first thought was who spelled vertebrae with two “v”s?   Her second that she only had two fillings and a crown.  She shrugged off the coat, hoping for a clue, only to discover the familiar rip in the lining.  The warmer coat was her own.

Light spilled out of the open case.  One summer, her mother had explained the birthday problem: how, if only twenty-three people are in a room, the probability that two will have the same birthday is more than fifty percent.  Her mother had carefully drawn the graphs.  Four men at Stacy’s party had had the initials E.M.; two were brothers.  Lydia pictured the man she wished was the author, and the men she hoped weren’t.  If fifty-seven people are in a room, the probability of two coinciding passes ninety-nine percent. Probability worked in contrary ways that could be neatly plotted.

Lydia sat down, wrote her own note, tucked it into the case, and headed out to retrace her steps across the park.  For the probability to travel that last one percent – from ninety-nine to a hundred – three hundred and sixty-six people had to squeeze into the room.  But only one, thought Lydia, would own a silver cigarette case with four butterflies. 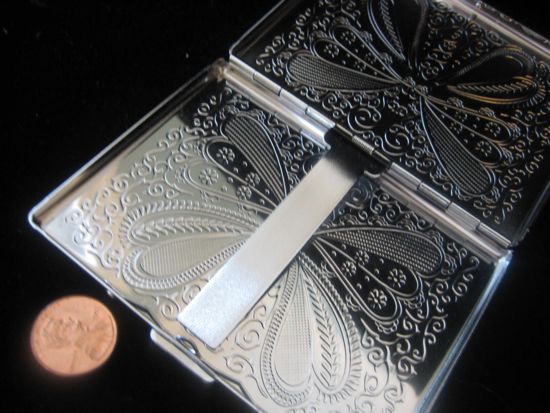 Margot Livesey's most recent novel is The House on Fortune Street.