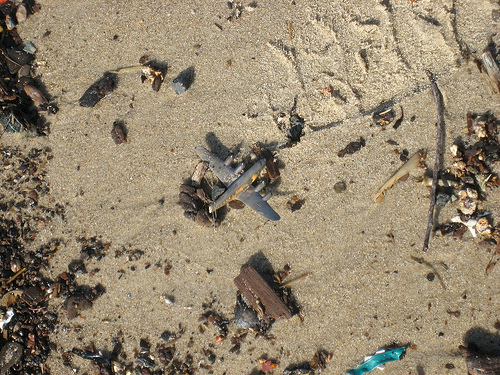 Object No. 49 of 50 — Significant Objects v2. Note that UNY found two toy airplanes at Dead Horse Bay; the toy shown here isn't being auctioned off, but the one below is.

[The auction for this item, with story by Robert Lopez, has ended. Original price: $1.00. Final price: $19.50. Part of a special collaboration with Underwater New York, this object’s story shipped rolled into a vintage bottle found on the beach of Dead Horse Bay, Brooklyn. Proceeds from this auction go to 826 National.]

A man on a park bench then another man next to him.

The first man there for no good reason.

The other man the kind of man who sits next to strange men on park benches.

This other man has with him a toy airplane.

He holds the toy airplane in his right hand, which is battered, bloodied.

It looks as though the other man had been in a street-fight and was declared the winner. The toy airplane his trophy.

The other man holds the toy airplane like a trophy.

The day has in it the sky and sun.

There are clouds and women.

A week goes by. Then another.

Then the man holding the toy airplane speaks.

And of course to make a long story short, he says, anyone living in a pretty how townhouse can look beyond themselves into the kitchen breakfront and clearly see between two pieces of ordinary china that every second of every livelong day of an already long week in a rather long month can often lead to an even longer year and subsequently is almost always followed by a long decade which is only one tenth of a long century and compared to the long long millennium is practically insignificant on this or any other beautiful Sunday morning.

The first man says, I know what you mean, and leaves.

The other man remains on the bench holding the toy airplane for the rest of his natural born life, which concludes twelve years later on a Thursday evening, just before dusk.

The body goes undisturbed until the next day when a passerby alerts the authorities. Two hours later the body is removed and taken to the county medical examiner’s office.

There is no mention of the toy airplane in the medical examiner’s report, only a note concerning the right hand in which the subject held the toy airplane, which was strangely contorted and atrophied. 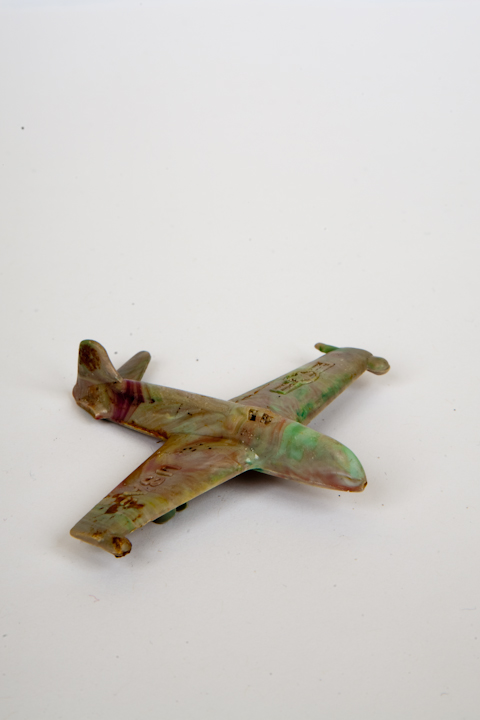 Robert Lopez is the author of two novels, Part of the World and Kamby Bolongo Mean River. A collection of short fiction, Asunder, will be published by Dzanc Books in November, 2010. He teaches at The New School, Pratt Institute and Columbia University.