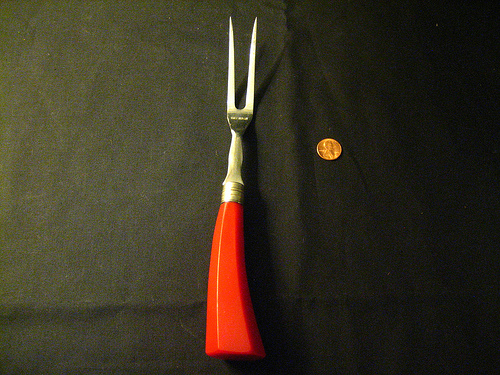 [The auction for this object, with story by Dan Chaon, has ended. Original price: 50 cents. Final price: $26.01. Significant Objects will donate the proceeds from this auction to Girls Write Now.]

When you are a widower, you’re supposed to move your wedding band from the left ring finger to the right. This is etiquette, or something. An old tradition.

When I removed the ring, about a year after she died, there was a crease in the flesh below my knuckle, a little belt that didn’t go away, though I massaged it and rubbed it with lotion; it appeared that it would be more or less permanent. Weird! That was what made me remember the fork.

It was a two-pronged carving fork with a bright red plastic handle. When I was twelve, I stole it from the silverware drawer. I was very interested in the weapons of fantasy at that time: halberds and katanas, daggers and scimitars. The sorts of things your character would wield if you were playing Dungeons & Dragons.

A carving fork sinks easily into a brisket or a roast turkey breast, but the tines are not that sharp. When you press the points against the underside of your forearm, you can exert considerable force without breaking the skin, just a couple of blanched indentations in your flesh. Then the dermis rises back, leaving only small red dots — like gnat bites — which fade as well.

Here: your wrist, where a bundle of blue veins shift thickly when you prod them. Here: your ruddy, meaty palm, webbed with fortune-teller lines. At this point, you are not really able to push the fork through. You’re just experimenting. Here: okay, admit it — your most sensitive spots, the nipples, the soft hollow in your throat, the glans of your cock —

What does this feel like? How much does it hurt?

The memory appears abruptly. A glint of metal, a prodding of synapse that hasn’t been awake for years. Suddenly adolescent again: that illness unfolds in me and it’s funny because I realize that it’s not something I would ever have told my wife. She would have wrinkled her nose. Boy stuff, she would have thought — like talking about shit or boogers, gross and uninteresting.

And yet, who else am I going to tell this little anecdote to?

I sit here looking at the impression the wedding ring has left in my flesh. I suppose that it will eventually go away.

My wife was the first and only girl I had sex with. We met when I was eighteen, and she died when I was forty-five.

I don’t know what became of the fork. I used it for a while, and then, I guess, more than likely, I put it back where it came from.

Dan Chaon is the author of the novel Await Your Reply, among other works of fiction.

One thought on “Cooking Fork”