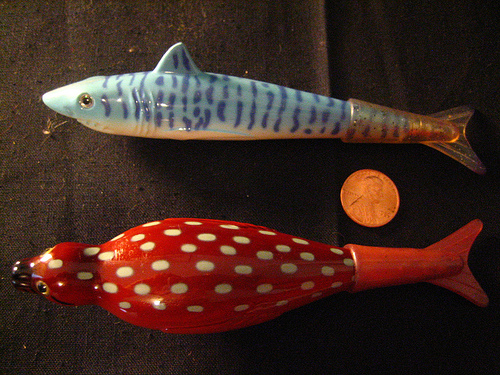 [The auction for this object, with story by Susanna Daniel, has ended. Original price: $1.99. Final price: $35.00. Significant Objects will donate the proceeds from this auction to Girls Write Now.]

In the game of water polo, the goalie must be strong enough to rise from the water and stay vertical without sinking, to track the ball and lunge for it. This was the position I played for one season, when I was a sophomore in high school. I tried out because Stacia Kaminski mentioned me to Coach Mackey, and he called me in.

It was the most I’d spoken all day, maybe all week. In my house no one talked, though every so often my father hollered at the TV, or at my mother. After my first match—we won—Stacia handed me a pink gift bag with a white bow on it, and inside were these two pens. She said now I didn’t have to choose.

I didn’t realize how much other families talked until Stacia took me to her house. Her father was in the garage when we arrived, and Stacia told me he was building an airplane that he would fly himself. When her mother called him for dinner, he came to the table wearing a headlamp. Mrs. Kaminski reached over and turned it off. “Who are you?” he said to me. Stacia told him. “Let me tell you something,” he said. “That plane’s got one hundred and ten thousand, five hundred and ninety-three parts, total.” He laced his fingers together. “Guess how many pieces were missing when those boxes arrived.”

“How many?” I said quietly.

“Eight hundred and forty-two. I went through every box, counting. I made a list. I called the company and they sent the pieces. They overnighted them, which gave me a chuckle. But you can’t make something if you don’t have all the ingredients. Like this lasagna. Right, honey?”

“That’s right!” said Mrs. Kaminski, and Stacia’s father went on: the cheese, both ricotta and mozzarella; the tomatoes; croutons for the salad. I thought at the time—and still I think it, though I’ve  learned to stand on my feet in the world, to speak my thoughts, even to chit-chat—that he was the most interesting person I’d met.

Stacia invited me again the next week, then the next. Every time, Mr. Kaminski wore his headlamp and Mrs. Kaminski said grace. After Stacia’s accident—they said what happened to her was something called shallow water blackout, and they blamed Coach Mackey, who’d taught us to hyperventilate before going under—Mr. Kaminski called my house and invited me for dinner. If I could find my way, he said, I was welcome. So that week and every week until I graduated, I took the bus to their house, and I helped set the table, and I spoke when spoken to, and I listened. Sometimes while he was talking, Mr. Kaminski wept a little. I watched the tears sink from his eyes to his lips, which kept moving. 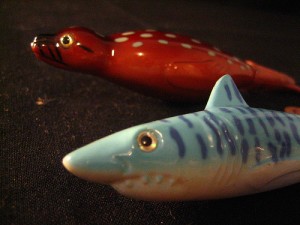 Susanna Daniel is the author of the novel Stiltsville, forthcoming from HarperCollins in August 2010.

One thought on “Shark and Seal Pens”