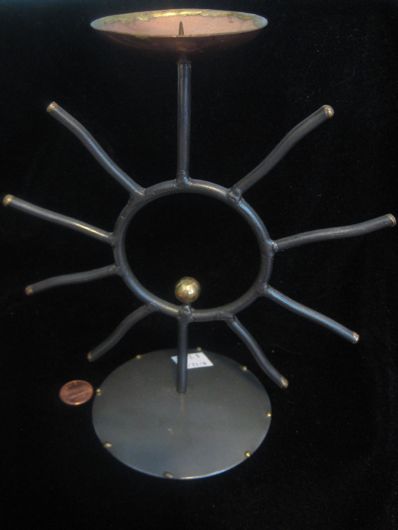 Significant Objects X Litquake No. 1 of 5.

Candra was raised by chance operators. Later, rejecting the coin tosses and water-damaged ceiling readings by which her mothers navigated, yet unable to put her faith in any non-arbitrary criteria, she agonized over decisions.

She went to her siblings for advice. Her sister, an eschatologist said, “No worthy decision is easy. That said, at this historical juncture it’s impossible to make the right decisions; just try to make good mistakes.” Candra yearned for more noble counsel. Her brother said, “You become spiritual or go crazy: these are the options. The goal of doubt is belief – if you can’t bind yourself to a set of those, then you will go nuts.” She went to a pungent occult shop. She waited until nobody else was lurking, then poked and glanced around cautiously. The proprietor watched her, an owl with a tremendous brown beard, baldly moving his head. She saw a book called Say Yes. Instantly she decided to adopt that program.

She bought the next thing she saw, an object being sold as a candleholder that was actually a defunct project of the store owner: an unfinished astrolabe. She also bought a candle. Her building was going through lead remediation at the time. The landlord showed up with a lead tester and patrolled the rooms, her device chirping. The landlord saw the astrolabe for what it was. An amateur astronomer, she asked if Candra wanted to go to the beach. Candra thought say yes and said yes. The landlord pointed to the astrolabe and asked Can we bring that? Candra said yes. At the ocean Candra’s landlord positioned the astrolabe. “It’s one in the morning,” she said, though it was four in the afternoon. “Yes,” said Candra. The landlord offered Candra a pill: she swallowed.

Several friends of the landlord turned up and they all took pills. Cresting waves washed up mysteries. They parleyed with talking clouds. Sudden animals gave warnings and instructions. Part of the group disappeared and the others went looking for them; then the first group reappeared and the second group was lost. Candra got separated and walked seventy blocks home. A bobbing, disembodied head accompanied her most of the way incessantly talking, just to her right, before finally dissolving. She recognized it; it was her life, that noise.

Exhausted when she arrived home, she lit her new candle, stuck it into the astrolabe, and ran the tub. Moments later she heard a thunderous flooding sound from below. She ran down to the caged stoop at the front of her building and saw a man with bright red eyes peering through a gap in the sidewall where he had wrenched out a board. Behind him she saw a shattered window. Coincidentally, a pipe as thick as his torso had burst, just as he had been breaking in.

Candra was startled: the disembodied head! The head was also alarmed – he was up to his knees in water. He urged her, crafty-faced, to come down into the basement. Why? She countered, you should get out of the basement. But I need you to come down here and see all this water, he said. She refused, backing away. Her sister was right: she should make good mistakes. By no criteria, fixed or random, could Candra rationalize crawling through a broken wall into a flooded basement with the red-eyed man.

Miranda Mellis is the author of The Revisionist, Materialisms, and None Of This Is Real, and an editor at The Encyclopedia Project. Her writing appears in various publications, including Conjunctions and The Believer. She teaches at California College of the Arts and Mills College.