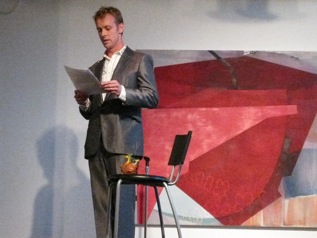 Sounds like things went pretty well at our debut live event out in San Francisco, at least if our friends and contacts are to be believed:

“It was fantastic! Loved it. Huge crowd, super fun.” “Not sure how to explain how awesome it was. Total, almost bizarre, success. Rob [Baedeker] was a perfect emcee, the readings were punchy and terrific and then the slam part blew everyone’s minds; painful to pick a winner from all seven excellent submissions. All in an hour!” “Most of all — awesome. … . A short fun reading in which there is at once formal constraint, benefaction, sociability, literary verve, and gallows humor! Now that is weird! More of that please.”

You get the idea.

The last remaining piece of business is to fill in those of you who couldn’t make the scene about the Object Slam. Seven brave audience members stepped up to invent stories, in a mere 10 minutes, about an object revealed at the event. Most, we hear, wrote their stories longhand. Interesting, no? But as it happens, the winner wrote his story on an iPhone! We’ll publish that story tomorrow. The object, however, will not be sold (or not by us, anyway) — it now belongs to our Object Slam winner, commemorating his triumph. (Making it a Significant Object indeed!)

Meanwhile you still have time to snap up one of our last few Objects + Stories with proceeds benefiting our event venue, the estimable Root Division.

P.S. more pix plus an account of the evening on the Electric Literature blog.

UPDATE –> More pix after the jump. 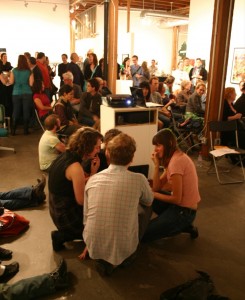 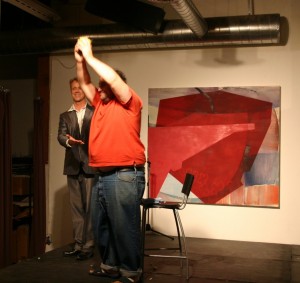