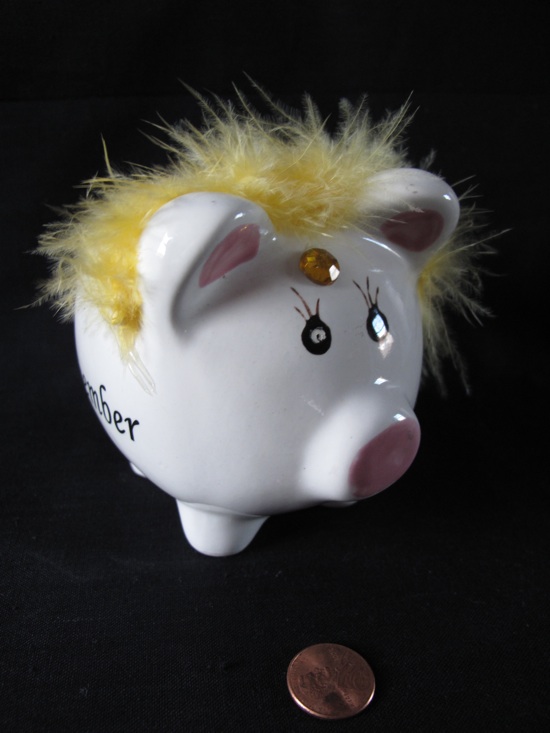 [The auction for this item, with story by Martha McPhee, has ended. Original price: $3.00. Final price: $20.50. Significant Objects will donate the proceeds of this auction to 826 National.]

My grandmother gave me the piggy bank when I was four, for Christmas, wrapped in a box with bows.  She said, “A penny saved is a penny earned.”  She said, “Find a penny pick it up, all day long you’ll have good luck.”  She wore a beehive of blue hair, had piercing green eyes, dressed in expensive-seeming clothes.  “A lady of quality,” she said.  She sold Avon door to door and from the living room of her two-bedroom ranch on Lover’s Lane in Heather, Illinois.  Her house smelled like honeysuckle.

Only good-luck pennies went in my piggy bank.  It was the kind you had to smash to retrieve the coins, so as I accumulated them I had no idea how many pennies I had.  By the time I was in my thirties it was gathering dust and heavy, substantial with the weight, but I could jiggle it and feel there was still room.  I’d look at the feathery tiara and the jewel between the brow and think of all the luck the pig held.

I almost got married: here, in Heather, to a handsome guy who’d been the star of the high school football team.  I hadn’t known him then, but through his smile I could see him as a teenager—gleaming white teeth—driving fast in cars with girls excited that it was their turn.  Later, after we broke up, I realized those  had been the best days of his life.

“I want to see how many pennies are in the jar,” he said to me that afternoon: cold, the world covered in a thick snow.

“With all those pennies, there’s one worth something.  There’re pennies worth thousands, you know.  We could get out of here.”  And he pointed out the window of my condo.  I owned from the walls in, but was proud of the views—vast expectant fields.

“Your grandmother’s dead.”  He picked up the pig.

“I’m not dead,” I said, hiding my worry, that he’d drop the pig to have his way.

“You’re gonna wait ‘til you’re dead to find out if you’re rich?”

“Put it down, Jimmy.”  I shouldn’t have said that.  He lifted the pig higher, beautiful pig.  There are some people who just want to take what you’ve got.  Just then he dropped it.  You know the crush in your chest, its weight?  The pig’s mascara eyes, they were my grandmother’s looking at me still.  I lunged.

My grandmother once said to me, as I was pushing her up a hill in a wheel chair, “Amber, if we put our minds to it, we can do anything.”  I soared, arms out stretched to catch it, realizing, no matter what, that pig, its luck, would always be mine.

One thought on “Fancy Piggy Bank”