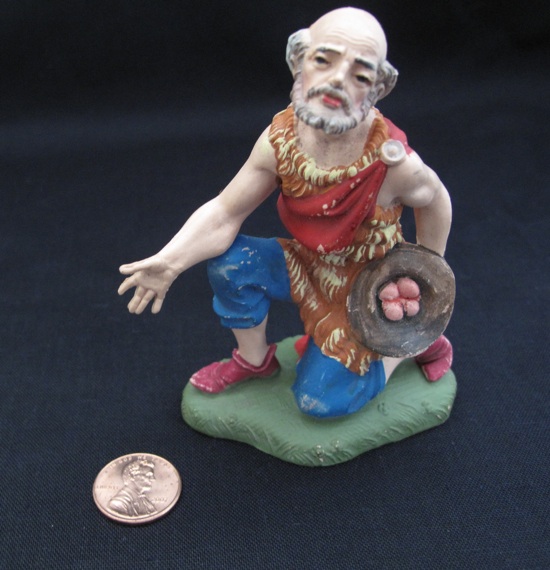 [The auction for this Significant Object, with story by Glen David Gold, has ended. Original price: $2. Final price: $56.50.]

Hell, of course, has a hierarchy; it is by definition all hierarchy. As James Blish noted, any act of magic requires harnessing the work of one demon at a time. Those who answer the call are subalterns, grumbling Malebranches whose job otherwise is to stir the pitch into which politicians are tossed. Think of them as the enlisted men.

The officers — the ones who disdain pacts with sorcerers — are demons with actual names. Above them — the majors and colonels — are the 400 primal sinners envisioned by Albertus Magnus in Ein Katalog der Kritiker die Ihren Eigenen Berichten Glauben. Higher still are the 13 evil forms identified by Eliphas Lévi before his mysterious fall from the window of l’abbaye du psellus. Unspeakably powerful, the generals above them are Belial, Othiel, and Qemetial, of whom Aleister Crowley wrote “Let no man see these dark shapes before the final dawn approaches.”

And ruling them all, Lucifuge Rofocale, tyrant of hell. At his fingertips are the powers of the 15,485,863 (a deconsecrated prime number) demons below him. Controlling him? Unlikely.

The possibility of summoning this ur-demon has frightened the most rational of scholars. In the age of the Enlightenment, Athanasius Kircher is said to have torn crucial pages from the Voynich manuscript’s cryptic sections on herbs and astronomy to prevent exactly this evocation. Nonetheless in the course of several generations, the mysterious Eruditi di Nerezza managed to file away the procedures required. When the Collegio Ghislieri located the single necessary talisman, their sanctuary — stone towers and all — burned to the ground with no survivors.

And yet tales of the talisman remained.

Etchings in The Grand Grimoire, assembled in 1522 by Alibek the Egyptian, indicate it would depict one of the pseudo-Solomons, a bald-headed figure, bearded, in supplication. He would show wear on his knees (from prayer) and his bib (from feasting on mysterious flesh). He would hold a hammered copper tray of offerings (four serpent eggs dyed in rosewater) in his left hand. His right would be extended in the anatomically-difficult position of first and last finger splayed, center fingers adjoined, making in other words the sign of the sage bound to Baphomet.

The base would be verdant green, textured grass, representing nature trampled by the self-determination of man (and by extension, of demon). The figure would appear to wear the skin of a golden bear he had slain himself, surmounted with a red silk cloth representing sacrifice, and leather shoes made from the skins of his enemies. His trousers would be blue, and have no significance.

Descriptions at this point traditionally conclude with a warning/exegesis on the nature of desire. An object is only an object unless invested with manna, animal spirit. In short, all authorities from the Deum te Inharmonium onward have noted power does not tend to give itself up. Thus the talisman’s guardian must desire power with a single-minded lust, slaking off any vestige of humanity like a snake shedding its scurf.

In order to use a demon, you must believe in a demon. Which carries its own price. The pact will get you all that you want, but, as it will be provided by demons, nothing that you keep.

Glen David Gold is the author of the best-selling novels Carter Beats the Devil and Sunnyside. He has written short stories, essays, memoir and journalism for McSweeney's, Playboy and the New York Times Sunday Magazine.