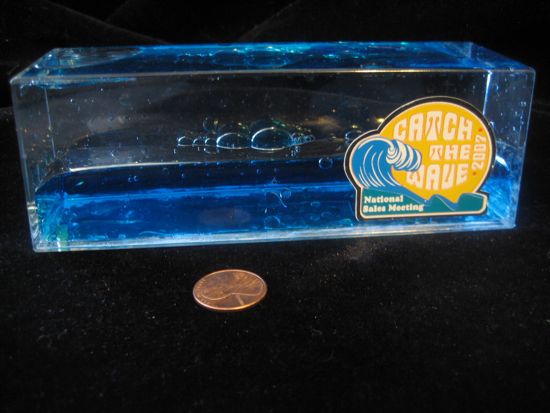 [The auction for this Significant Object, with story by Teddy Wayne, has ended. Original price: 50 cents. Final price: $20.50.]

At the Ramada Hotel and Conference Center Qualcomm Stadium San Diego, on a June weekend in 2007, eighty-two men and women from Sealy, the mattress giant, converged for their national sales meeting.  Sealy was falling behind in the burgeoning memory-mattress market and its finances were, in industry parlance, “sagging.”  One right rectangular prism made of Lucite with a “Catch the Wave” decal, half-filled with viscous liquid, was awarded to Richard Caulkins, a mustachioed sales manager from Omaha whose branches had outperformed all others in the previous quarter.  Upon his return to Nebraska he gave it to his eight-year-old son, who sloshed the liquid around for a few minutes and unsuccessfully attempted to crack the prism’s clear walls before getting bored and running out of the house to play.

But its history is immaterial.  You will receive the Lucite prism.  You will marvel at its viscosity.  You will think of a motor oil commercial from your youth touting its product’s ability to resist viscosity and fight thermal breakdowns.  You will place the prism on your coffee table as a kitschy, ironic gesture.  You will wonder if you are too old and bourgeois to be decorating ironically.  When friends come by, they will, in puzzlement, ask if you received the prism from work.  You will titter, explain that its placement is ironic, and nervously gauge their reactions.  They will smile politely and tilt the prism’s liquid around a few times, then return to the previous conversation, which will be about work problems, or sexual problems, or interpersonal problems.  These are problems with which you are familiar from either previous discussions or your own identification with them.  You will recite rote solutions or expressions of sympathy from muscle memory, meanwhile casting a surreptitious glance at the still-sloshing prism, watching its encased waves that cannot be caught, thinking about thermal breakdowns, closing your eyes and dreaming about diving into the bracing Pacific, imagining the Caulkins son’s escape from his father’s suburban row house with the aimless adventure only children possess, and, when you open your eyes, the liquid’s viscosity will have brought itself to rest, thickly, silently, within its six clear walls. 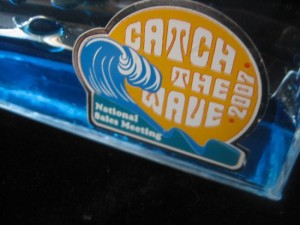 Teddy Wayne is the author of the novel Kapitoil, forthcoming from Harper Perennial in April 2010.