We’ve discussed the intrinsic appeal of some Significant Objects – but what about those objects that lacked such appeal? Things inexplicable, but not in a way that doesn’t necessarily make you want to know more. Sometimes objects like the now-notorious Scottish Doll did not appeal to our writers, and were not chosen for Significance-making. But in a few cases, we actually auctioned  objects that (to me at leas) bordered on trash. Or outright repulsiveness.

Click here to view a single table containing all our experimental data, and links to every post in which analysis of this data has been offered. 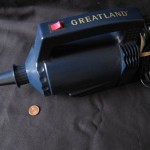 For instance: the Device. We didn’t even know what this thing was supposed to do, let alone whether it actually did it. I cringed when Tom Bartlett announced that this mysterious piece of junk was the object of his choosing. Sure, he’d get a good story out of it. But we sell these things; who in the world is going to want to buy that? Same with the Popsicle Stick Construction, chosen by Sara Ryan. Very inspirational for story invention. But not much charisma as an ownable thing. 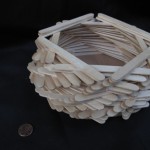 I suspect most writers aren’t really thinking about that angle when they choose an object; it only occurs to them later, when the auction has started. That said, I never made an effort to dissuade anyone from picking something unappealing, because the results would be interesting for our experiment. If we aimed to prove that narratives could add value to bric-a-brac, the toughest test our hypothesis could face would be in the context of stuff with not much physical appeal at all. 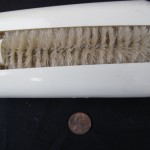 Which brings me to the crumb sweeper (story by Shelley Jackson). I still can’t believe Josh bought this thing. He paid a dollar, but that seems high to me. The very concept of a crumbsweeper bought at a thrift store strikes me as revolting. I mean, WTF? Anyway, I refused to believe anyone would bid on it, no matter how good the story.

I was wrong. In fact, none of these unappealing objects proved impervious to bids. The Device went for $15.50. The Popsicle Stick Construction, for $15.50 as well. And the crumbsweeper you ask? Try $30.99.

True, these not-so-appealing items don’t appear on Josh’s adjusted top-25 list. (I’d say the least intrinsically impressive object there is the meat thermometer, although since we got a comment from someone who used to collect meat thermometers, maybe I’m just too much the philistine to appreciate the aesthetics of such things.) But in a way, these  prove our point better than those that top-sellers did. Our writers, it seems, were able make even the least-appealing objects Significant.

Needless to say, if you have thoughts about anything I’ve just said, we’d love to hear it. What do you think were the project’s least-appealing objects? The last thing I want to do is get Josh off another table-making jag, but I can’t help but wonder: If we’re going to correct for the project’s duration, should be correct for Object Appeal (Or Screaming Lack Thereof), as well?