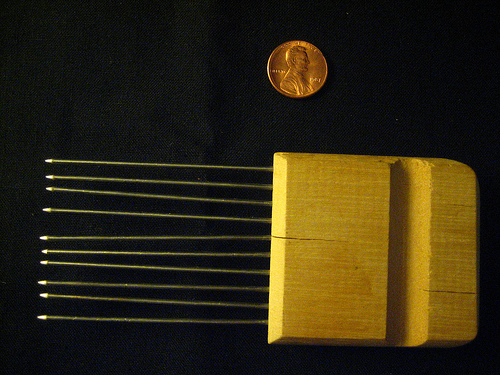 [The auction for this item, with story by Robin Sloan, has ended. Original price: $1.00. Final price: $13.50. Significant Objects will donate the proceeds of this auction to 826 National.]

So there was a banshee on our property.

We heard the wail first (naturally) and we heard it for a while before we ever saw her. At first we thought it was a wolf; then we thought maybe it was some weird machine at Fort McLean. Like, some big whining drill over on the other side of the valley.

But then we saw her. Far away at first. It’s actually scarier, in the forest, to see someone far away than it is to see them up close. You don’t know their disposition; you don’t know what they’re up to. You just see the shape coming across the clearing. Yikes! But up close, people aren’t that scary, and neither are banshees.

And then we saw her a lot. Whenever dad came home late, mom would ask: “How’s our friend?” “Oh, fine,” dad would say. “Looking lovely, as always.”

That was true. When she came closer to the house, pacing past the scrim of trees at the edge of the yard, you could see that she was lovely. Tall and willowy, as you’d expect. (Has there ever been a big voluptuous opera-singer banshee? That would be something!) And her hair was very dark but also red, like clotted blood, and it floated up around her head like she was underwater. There was just tons of it, a huge dark mass, totally cumulonimbus. She was more hair than banshee. It obscured her face entirely. Very creepy.

We’d sit at the window with all the lights in the house off; we’d let our eyes adjust to the dark and wait for her to come. Bundled up in blankets, drinking hot chocolate, feeling the goosebumps on mom’s arms. “There she is!” dad would hiss. We’d all make exaggerated oooh sounds, and then the banshee would ease into her high whine that grew then faded as she disappeared into the darkness. There was a melody to it; it was the same song every time.

Then one night we were watching from the window — dad was snapping long-exposure photos — and she was wandering and wailing, and she disappeared. Just vanished. She was there one frame, gone the next. I convinced mom to let me go poking out into the night with the big electrotorch. I came to the place in the trees where she’d been, and I waved the torch’s beam around, and there in the dirt I found the McLean banshee’s hair pick.

This would be interesting enough already — that hair! — but check this out: if you run your finger down the ten little tines, if you plonk them one-by-one… it’s her wail. It’s the same melody. This-is-the-song-of-the-ban-shee-Mc-Lean… (She wailed without words, but that’s always what I heard in my head.) It’s a good tune. Simple and sad.

It sounds like it comes from somewhere very far away. 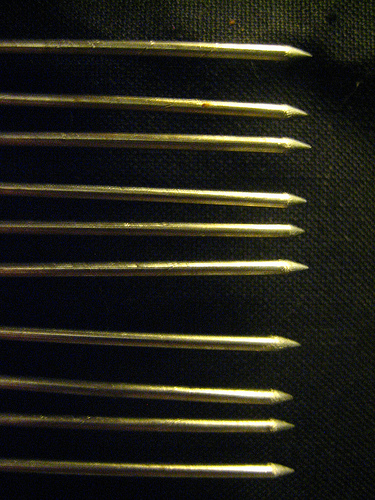 Robin Sloan is a writer and web generalist in San Francisco who works at the intersection of technology and storytelling. He shares his works-in-progress at robinsloan.com.

One thought on “Hair Pick”