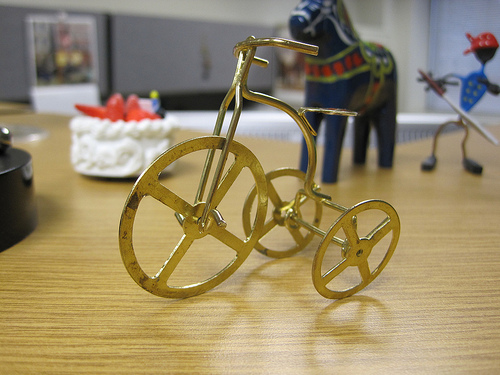 The Mystery Object (since revealed, of course) in its new home.

With the close of the last auction of Significant Objects v2 on Friday, we can now report that this cycle of 50 object/story auctions ended in  $74.61 worth of flotsam selling for an impressive $2,244.11! We’ll crunch the numbers later, but that represents higher per-item prices than v1, which is pretty exciting.

As you know, v2 raised money for 826 National, the nonprofit that tutors young people in creative and expository writing. And while we reserved the right to divert a small portion of proceeds to help offset our costs (more after the jump if you want details), it turns out we won’t have to do that after all. As explained earlier, we decided to place one tasteful ad-spot on the site, for this very reason, and the move paid off. Thanks to The Deck, we’ll be giving the entire $2,244.11 to 826 National!

The only bad news is we didn’t really get enough ad revenue to afford a giant prop check. Next time.

Anyway, we have lots of people to thank for making v2 a success — all our writers, the bidders and buyers, the amazing folks at Underwater New York, everybody who helped us create and got involved in our Fictionaut group, everyone who wrote or blogged or tweeted about the project, and of course our readers.

Regarding our costs: Those would be the objects, eBay seller/listing fees, shipping materials, Web hosting, and so on. The curators’ time is not compensated.

The Music Box, whose story by Nicholas Rombes came out of our Fictionaut group, in its new home.