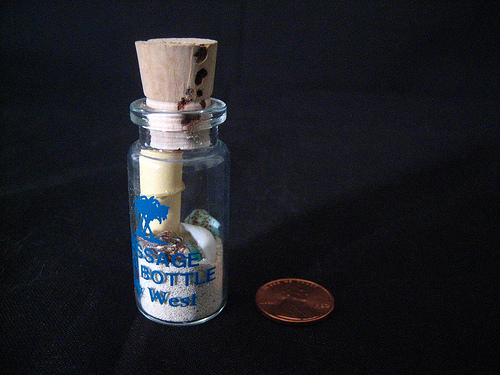 [The auction for this Significant Object, with story by Ben Greenman, has ended. Original price: 33 cents. Final price: $59.50. This is the last of three stories in our Identical Objects series. Proceeds from this auction go to Girls Write Now.]

Dennis shot a man dead in Key West.
Nell told Ada to have sex with Dennis’s brother, Dan, in exchange for drugs.
Edna lied.
Leon lied.
Nedra lied.
Anita cheated.
Rolf was greedy.
Nora was greedy.
Alice was greedy.
Carol was wrathful.
Leo lied and was slothful.
Jane wore a new dress on a date with Dennis and then returned it.
Reed took naked photographs of young boys and sold them to a pawnbroker in Hialeah.
Dena worked for the pawnbroker but looked the other way.
Dale cheated on his wife.
Basil was slothful.
Rae sold used mattresses as new.
Penny should have picked Dennis up at the Miami airport, but couldn’t get out of bed.
Lana did coke and had a threesome with Dennis before he left St. Louis.
Dave suffered from spiritual torpor.
Denny suffered from spiritual torpor.
Lena suffered from spiritual torpor.
Ida ate too much.
Bernadette ate too much.
Ben hit and killed a dog while driving with his friend Ned and drove off.
Ray did a shoddy job inspecting rides at an amusement park; a ride collapsed, killing three.
Lila stole.
Nina stole.
Jo stole.
Ira falsified a work injury and sued for damages.
Mara ate too much.
Sara was prideful.
Mario was prideful.
Jan was prideful.
Ina lied.
Lily lusted after her cousin.
Arne, Lily’s cousin, lusted after her.
Bette, Lily’s mother, boasted about her daughter’s grades but was blind to the situation with Arne.
Dan, Lily’s father, left her for a much younger woman.
Reba lived in Key West; Dan came to live with her and open a restaurant; they dealt drugs out of the back.
Diane fell in love with Dan and felt despair.
Lynn fell in love with Dan and felt wrath.
Ed envied Dan.
Eva stole.
Dana was greedy.
Lynne was enraged that Dan could not tell the difference between her and Lynn.
Pearl was slothful.
Isabel, who was in love with Dan but despaired ever having him, wrote down her desires on a piece of paper, rolled it up, pushed it into a miniature souvenir bottle, and dropped the bottle on the beach behind the restaurant.
Ada coaxed Dan out onto the beach one night with the promise of sex.
Ned hit Dan with his car; when he heard the thump, he thought of the dog he and Ben had hit and just kept on going.
Dee, Ned’s passenger, felt despair.
Rena, who witnessed the accident, felt despair.
Joel, a cop, heard about the accident from Rena; he was sleeping with her while his wife was dying in the hospital.
Lora, Rena’s sister, was in the threesome with Dennis in St. Louis, and she told him that Dan was dead.
Cecil bought pictures of boys from the pawnbroker.
Aaron lied.
Flora was vainglorious.
Tina, also vainglorious, came upon Isabel’s bottle, pocketed it.
Arden, Tina’s lover, accepted the bottle as a token of Tina’s affection.
Noel, Arden’s lover, rubbed cocaine on her gums during sex with Dennis and casually mentioned that if someone killed her brother, she’d take revenge.
Ellen was having sex with Ned when Dennis burst into the room and squeezed off two shots.