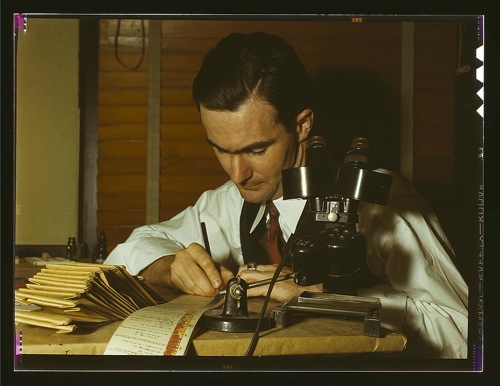 Rob Walker (or is it Josh Glenn?) analyzing SO data

The holidays are over, and here at Significant Objects we’re back at work, assiduously analyzing the data from our project’s experimental phase. Last month, we finished up our quantitative analysis; in 2010, we’ll focus on a qualitative analysis of our data set.

We’ve been tagging the 100 stories from Significant Objects v1 thematically: from “adolescence” and “bad parents,” for example, to “thievery,” “third-person omniscient narrator,” and “unhappy romance.” It’s a big job, and we’re not finished yet. Not to worry, though, we have other qualitative fish to fry, in the meantime.

While v1 was in progress, we tagged each story according to what we might call the qualities of object’s-intended-function and object’s-apparent-attributes: from “cat,” “cow,” and “dishware,” for example, to “promotional item,” “souvenir,” and “toy.” It should be fascinating to see whether cats sold better than dogs, say, or novelty items better than promotional ones. We’ll get around to adding a function/attributes column to our data chart later this month.

And then there are the categories! While v1 was in progress, we placed each object into one of the following four categories: TALISMAN, TOTEM, EVIDENCE, and FOSSIL. As I explained back in October, a fossil is an object that bears witness to a vanished era or way of life (including childhood); an object that played a role in a crime or memorable public event is evidence; a totem is an object from the natural world — animal, vegetable, or mineral — that is a tutelary spirit; while an object that has magical power, is lucky, or is alive is a talisman.

Below, you’ll find a chart — sorted by Adjusted Sales Rank — that includes, for the first time, a column devoted to categorization.

A couple of quick observations.

* Among the Bottom 25 object/stories, FOSSIL is by far the most unpopular category (1211), followed by TALISMAN (7) and EVIDENCE (6). The least unpopular category, TOTEM (1), is also — see above — the least popular. [But see Mimi Lipson’s obseravtions, in the comments below.]

So… what can we take away from this?

(1) Apparently, an object whose associated narrative has to do with a vanished era or way of life (including childhood) is polarizing: potential owners feel strongly about it, either pro (FOSSIL is tied for most popular category) or con (FOSSIL is by far the most unpopular category). Perhaps this is because we love stories that remind us of our own happiest times, and hate stories that remind us of our least happy times — or which recall times to which we can’t relate at all?

(2) Apparently, an object whose associated story has to do with tutelary spirits — animal, vegetable, or mineral — from the natural world does not inspire strong feelings in potential owners; TOTEM is both the least popular and unpopular category. However… since only eight of our contributors wrote totemistic stories, maybe it’s to be expected that so few made it into the Top and Bottom Twenty-Five?

(3) When it comes to object/stories in the TALISMAN and EVIDENCE category, more analysis is needed. Are certain types of talisman (animal figurines, say; or novelty items) more popular than others? Should we add a new category (ANIMATUM, say? ANIMACULUM?) for those talismans that are alive, as opposed to merely lucky? If the evidence is associated with an incident in the life of a celebrity, does that make it more popular than evidence associated with, say, a petty crime?

Readers, we can’t figure this stuff out by ourselves. Please take a look at the chart below and post your comments!

NB: Some objects we initially placed in two categories (for example, if a TALISMAN happened to be a Duck Vase, then we also categorized it as a TOTEM), but we’ve since decided that each object can only belong to one category.