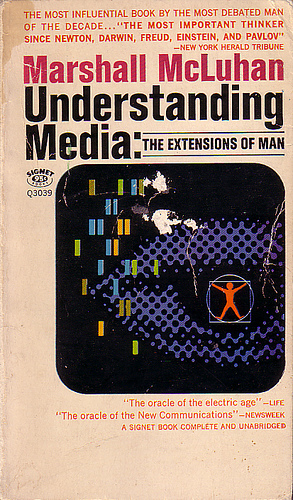 In Marshall McLuhan’s pioneering 1964 study, Understanding Media, the Canadian philosopher, literary critic, and communication theorist argued that “hot” media don’t require much work on our part when it comes to determining meaning; “cool” media, however, require us to participate more consciously in that effort. “Hot” media are more sequential, linear, and logical than “cool” media, which require us to be a little/lot more creative when it comes to “connecting the dots,” i.e., into constellations.

What if we coded each story from Significant Objects v1 as tending to be “hot” or “cool”? (I say “tending to be be,” because McLuhan was careful to note that “hot” and “cool” are not dichotomous terms, in his analysis; instead, they exist on a continuum.) In other words, might we discover that “hot” stories made an object more significant than “cool” ones, or vice versa? And what if we also factored in the object/story categories we’ve identified — i.e., is a “hot fossil” more or less significant than a “cool” one? I’m sure you’ve wondered precisely the same thing, readers.

Well, wonder no longer! After the jump, you’ll find our brand-new “hot”/”cool” table. We’ve linked to a few of the stories, so you can get a sense of which ones we considered “hot” or “cool.” In short, if the reader is informed more or less straight out what the object’s significance is, then the story is “hot.” If the reader is required to participate consciously in determining the object’s significance, then the story is “cool.” (NB: A close description of an object’s function, appearance, or history isn’t necessarily a “hot” narrative; a “hot” narrative is one in which the meaning of the object, for the story’s protagonist or narrator, is explicitly stated.) As noted, “hot”/”cool” is a continuum; if you disagree with the way we’ve categorized the object/stories, please let us know.

Here’s the table. What do you think? Notice any obvious patterns in the data?